How can an artist reconcile two vital needs: for visual thinking and for description? How can she make optimal use of these two impulses, these two ways of immersing oneself into the world and taking a disinterested distance from it? In silent cinema they came together in a montage of explicit visuality and textuality: a play that used both mask-like acting and script-like intertitles.

Olga Chernysheva (born in 1962, lives in Moscow) graduated from the Gerasimov Institute of Cinematography in Moscow in 1986, after studying in the department of animated film. She is now one of Russia’s best-known artists, showing video, photography, drawing (and to a lesser extent painting) in museums, galleries and biennials all over the world, but not – until this exhibition – in Finland. 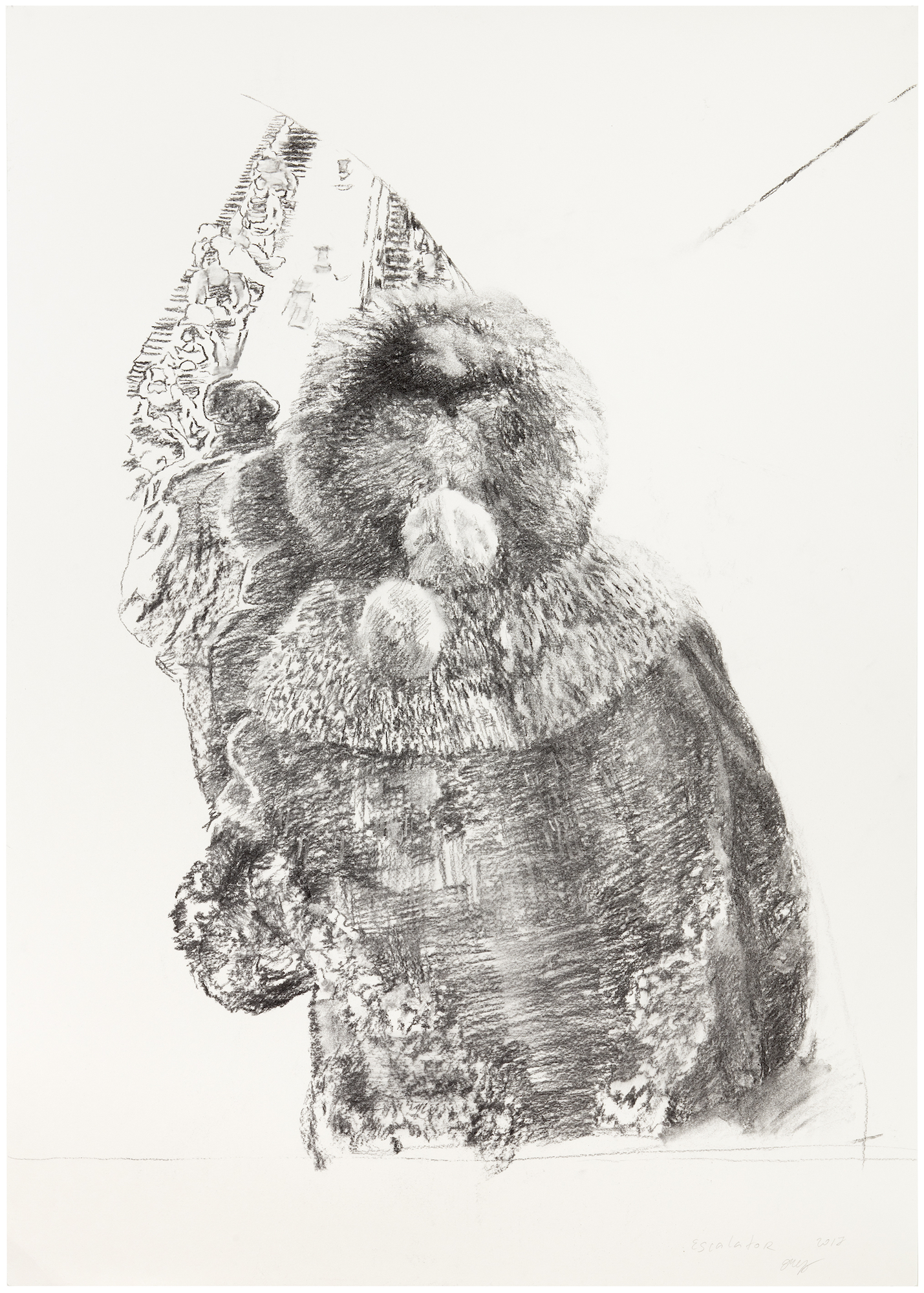 Cinema, forever seeking the right combination of image and word to produce the right constellation of affect in the viewer, continues to be a formative influence for Chernysheva’s work. At the same time she contributes to innovation within a Russian tradition that regards visual art (with the possible exception of icon-painting) as an arena for social commentary and thereby a medium of mass communication. Socialist Realism, the officially sanctioned art of the Soviet Union, did not appear out of a cultural vacuum.

Yet Chernysheva is not necessarily a realist, nor is her work socially or politically engaged in a conventional sense. It is too personal and precise, to experiential and experimental to fit easily into such genres or tendencies, yet it is invariably grounded in her extraordinary attention to detail and her empathy (which does not shy away from critique) for the people – and let’s not forget the animals – who populate the contemporary Russian everyday. 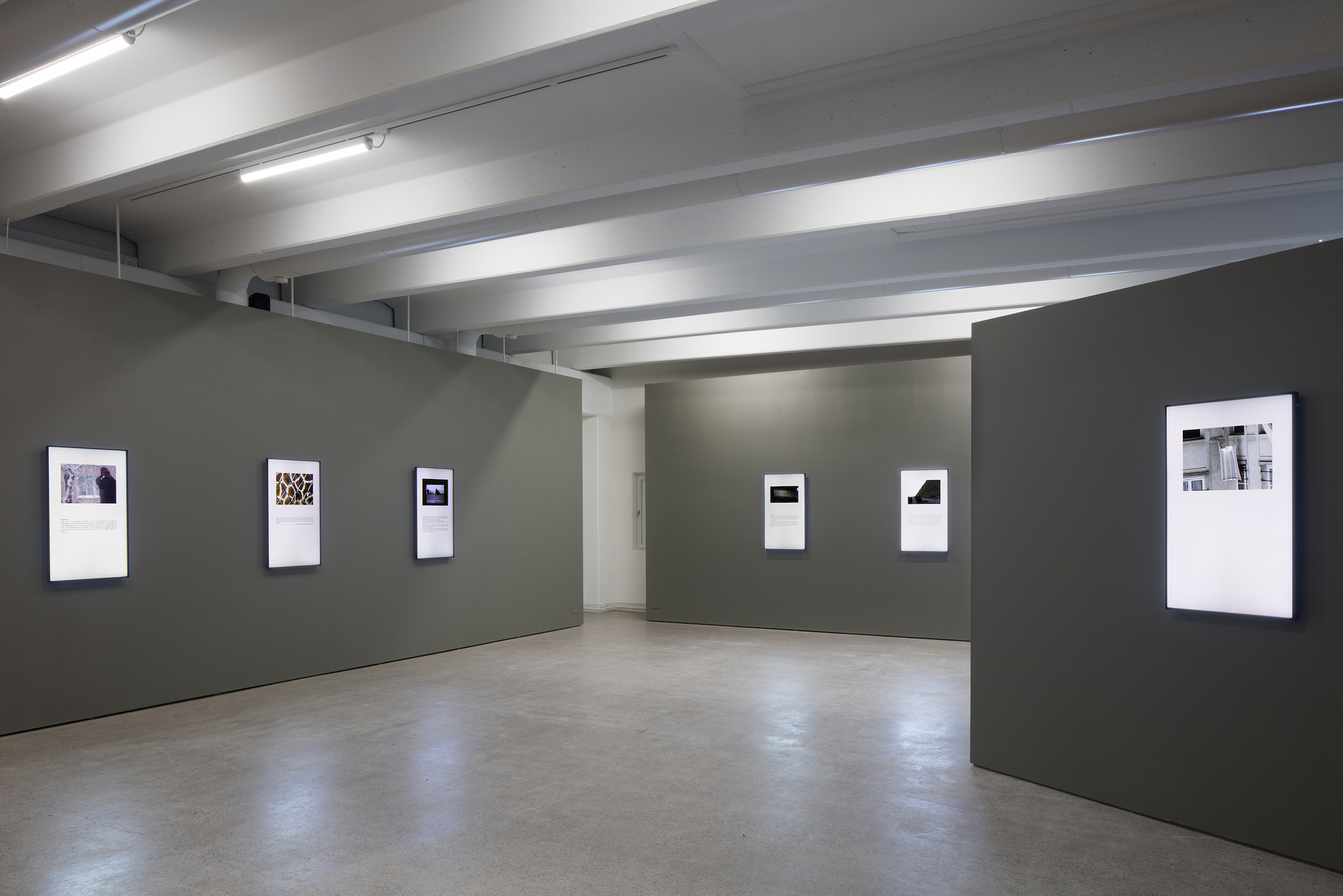 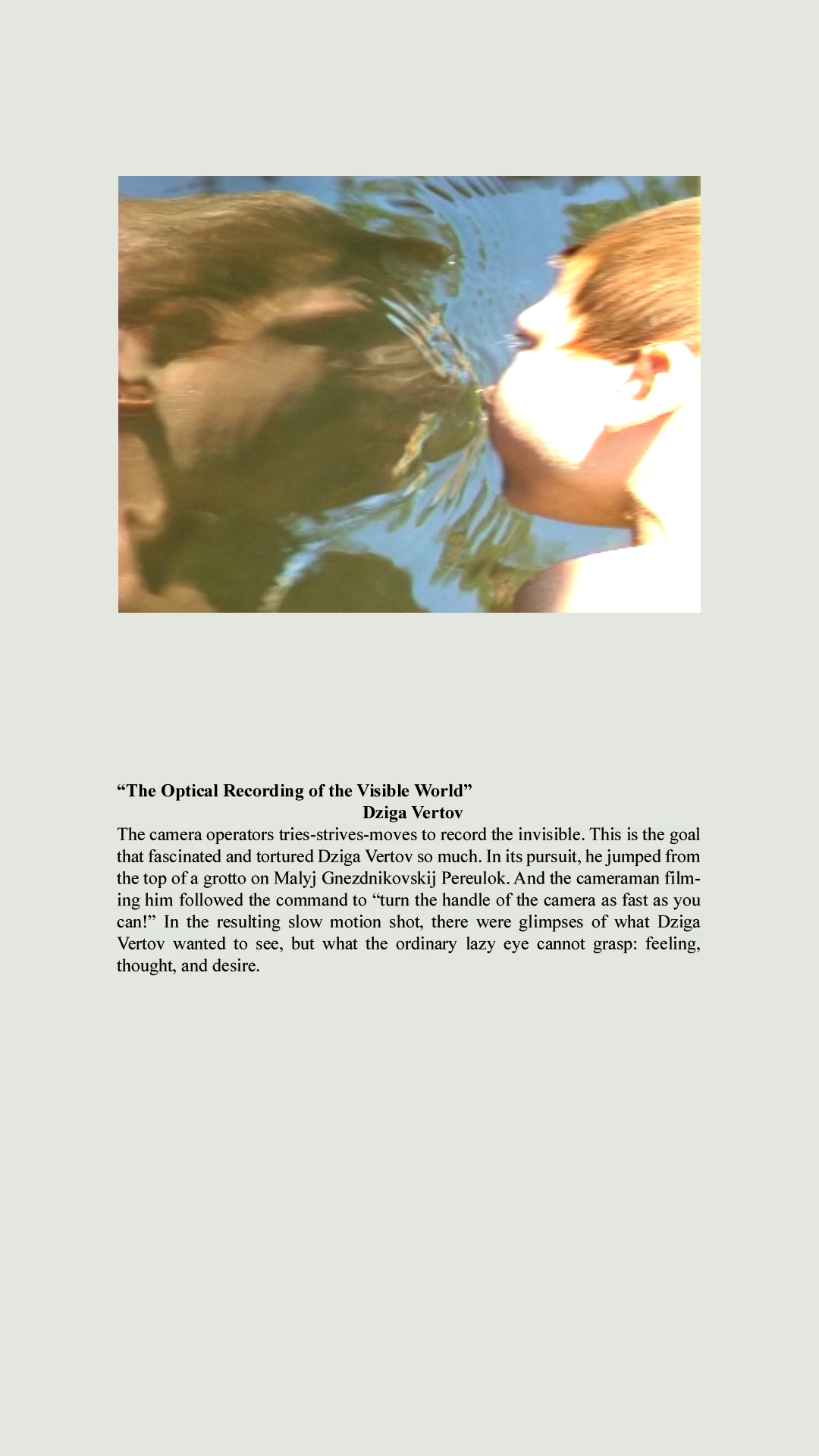 Olga Chernysheva, ‘The Optical Recording of the Visible World’, from Screens, 2010–17. Video still provided by the artist

‘Ordered Equivocations’, Chernyshevas exhibition for Kohta, could be seen as a variation in a ‘chamber format’ of themes explored in other recent projects, for instance in her solo exhibition at Wiener Secession. It includes a selection of twelve works from the ongoing series Screens, started in 2010: short moving-image ‘clippings’ paired with condensed texts (in Russian and English, with translations into Finnish and Swedish provided by Kohta) that might be characterised as micro-essays or prose poems, on topics ranging from Central Asian guest workers in Moscow to the plastic bags blowing in the wind outside the pyramids at Giza; from a story on the radio about carrier pigeon who walked all the way home to Immanuel Kant’s advice about ‘drinking the air through one’s nose’. 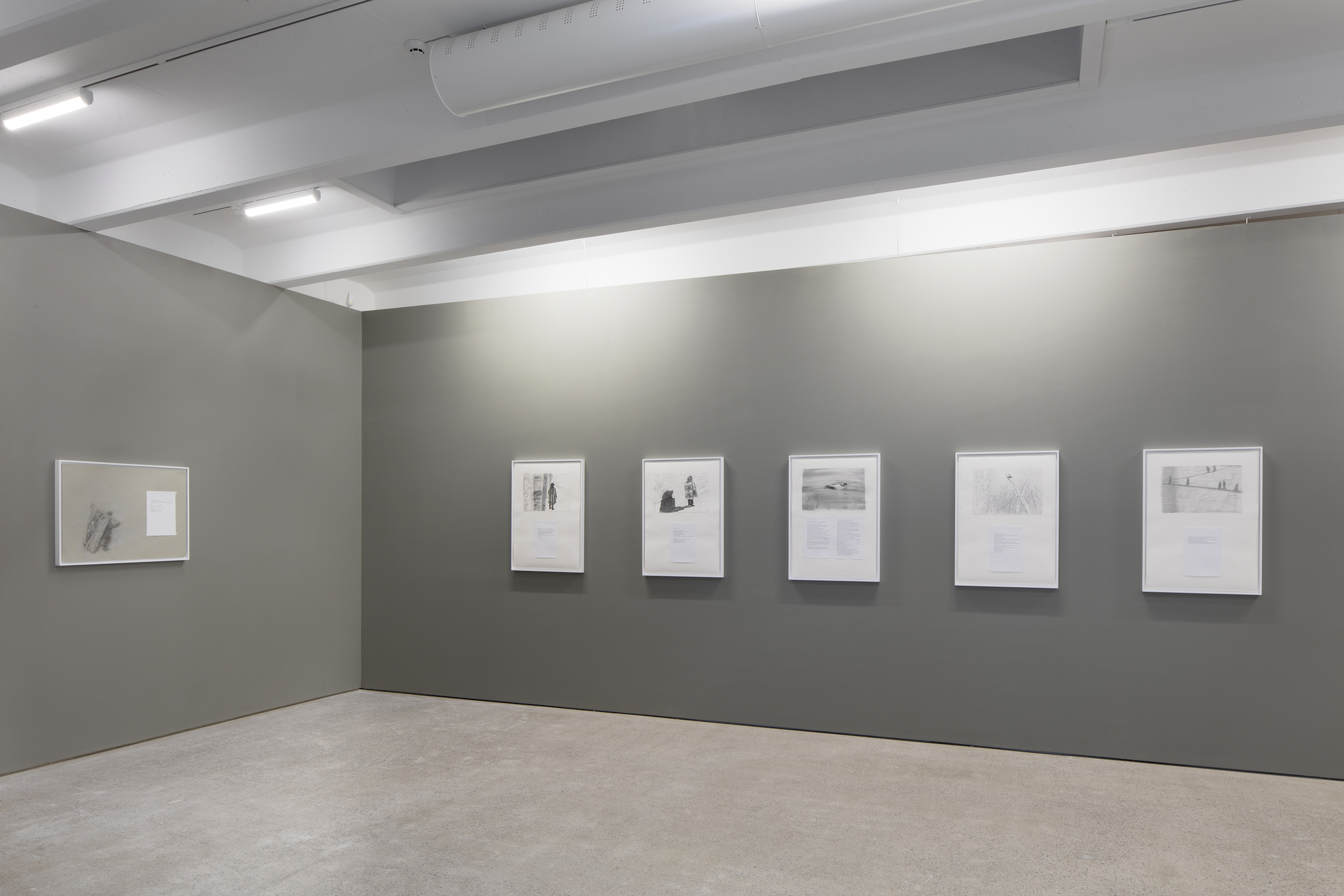 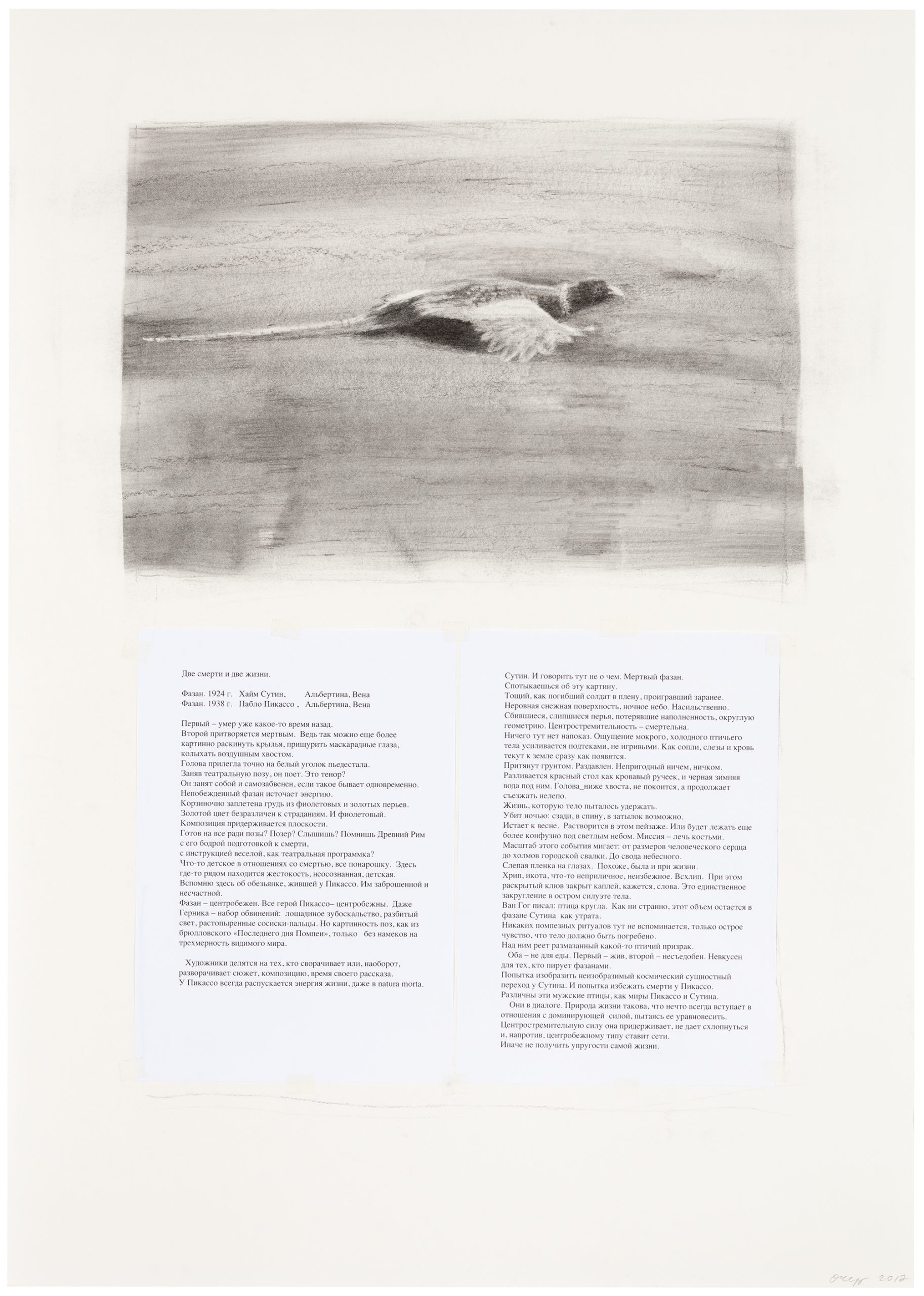 The former has been dead for some time already. The latter only pretends to be dead. That way it can spread its wings even more picturesquely, squint with masquerade eyes, flap its airy tail. Resting its head just so, on the white corner of the pedestal. Having struck a theatrical pose, now it sings. A tenor? It is self-consumed and oblivious of self, if it possible to be both at the same time. The invincible pheasant radiates energy. Its breast is basket-woven from purple and golden feathers. Gold is indifferent to suffering. So is purple.

A composition held together by flatness. Ready to do all for a pose? A poseur? Do you hear? Do you remember Ancient Rome with its cheerful preparations for death, accompanied by spirited instructions, like in a theatre programme booklet? A somewhat childish approach to death, all for fun. Cruelty is just nearby, unnoticed, unconscious. Childish.

Here I remember the monkey that lived with Picasso. Neglected by him and unhappy. The pheasant is centrifugal. All Picasso’s characters are centrifugal. Even Guernica. It is a catalogue of accusations: equine stupidity, smashed lights, spread-out sausage-fingers. But the poses are tableau-like, as if taken from Bryulov’s The Last Days of Pompeii, only without hinting at the three-dimensionality of the visible world. Artists can be divided into those wrap up their theme, their composition, the time of their narration, and those who, on the contrary, unwrap them. With Picasso, the energy of life is always dissolving, even in the nature morte.

Soutine. Not much to say here. A dead pheasant. You stumble over this picture. Emaciated, like a dead prisoner-of-war, already lost.An uneven snow-covered surface, a night sky. It is violent. Entangled, clogged-together feathers that have lost their fullness, their rounded geometry. A lethal centripetalism. Nothing here is for show. The sensation of the wet, cold bird’s corpse is enhanced through smudges that are anything but playful. Like snot, tears and blood flow towards the earth as soon as they appear. They drag us to the ground. Crushed. Good-for-nothing, face down. The red table dissolves like a rivulet of blood, and the black winter water underneath. The head is below the tail, not resting but as if on its way out, uncomfortably.
A life that the body tried to hold on to. It was killed at night: shot from behind, in the back, in the side perhaps.

It is thawing, it is almost spring. It is dissolving in this landscape. Or it will lie even more confusedly under a light sky. Its mission is to lie there as stiff as bones. The scale of this event flashes: from the size of a human heart to that of the rubbish heaps at the city dump. To the high heavens. A blind film over the eyes. It seems to have been there already in life. A rattle, a hiccup, something unsavoury, inevitable. A sob. Still, the open beak is closing on what looks like a drop: words. This is the only roundness in the sharp outline of the corpse.

Van Gogh wrote: a bird is round. Strange as it may seem, this volume is still there in Soutine’s pheasant, as a lack. No pompous rituals are evoked here, only the acute feeling that this corpse must be buried. Some kind of smudgy bird-ghost roars above it.

Neither of these two is to be eaten. The former is alive, the latter inedible. It is not tasty to those who feast on pheasants. Soutine attempts to visualise an essential transition that cannot be visualised. And Picasso attempts to avoid death. How different these male birds are, like Picasso’s world and Soutine’s. They are in dialogue. It is in the nature of life that things always enter into relation with a dominating force and try to balance it. Life sticks with the centripetal force and doesn’t allow it to collapse. On the contrary, it creates a framework for the centrifugal type. Otherwise, how could life itself keep its elasticity?’ 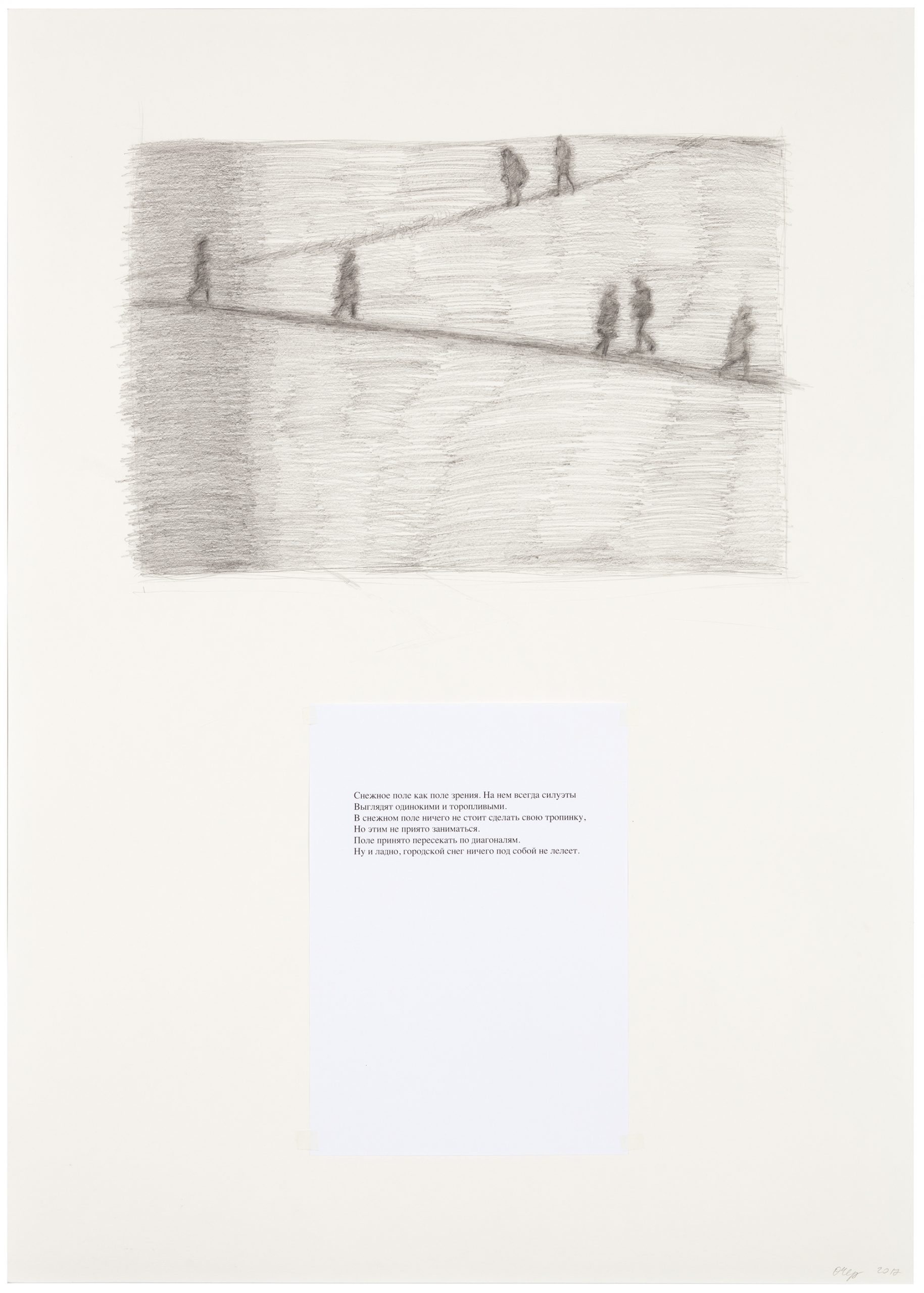 Olga Chernysheva, ‘Field of Snow as Field of Vision’, from Sketches for the Screens, 2017, charcoal on paper, collage, 84 × 60 cm. Photo: Jussi Tiainen

‘Field of snow as field of vision. There silhouettes always look lonely and hurried. In the field of snow it costs nothing to find one’s own path, but this is just not done. The thing to do is to cross the field diagonally. But OK, the city snow doesn’t hide anything anyway.’

The exhibition also included a selection of recent charcoal drawings, among them a series where Chernysheva employs the same strategy as in Screens, demonstrating once again that it may not be possible, or even necessary, for an artist to choose between speaking in images and sketching in words. In these drawings the delicate charcoal smudge stands in for the video window onto experienced reality. Equivocation (‘the use of ambiguous language to avoid committing oneself’) remains a valid strategy, she seems to be saying, for communicating one’s impressions of the world without impressing too much order on them: forever seeking the right kind of randomness to produce the right kind of ambiguity in the viewer.

The exhibition was organised by Kohta in collaboration with Galerie Volker Diehl in Berlin, Temnikova & Kasela in Tallinn and Matthew Stephenson in London, who all represent Olga Chernysheva. 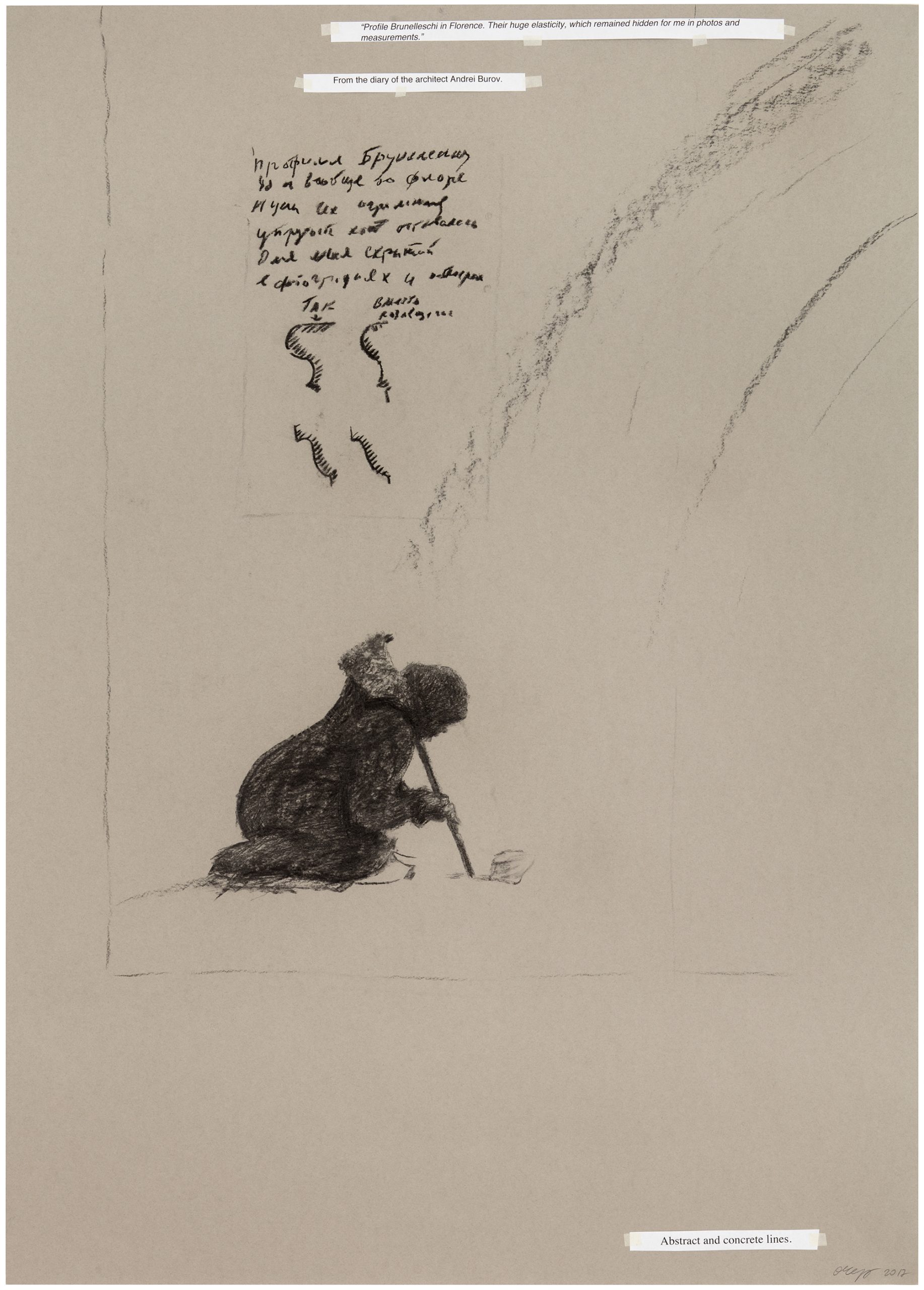 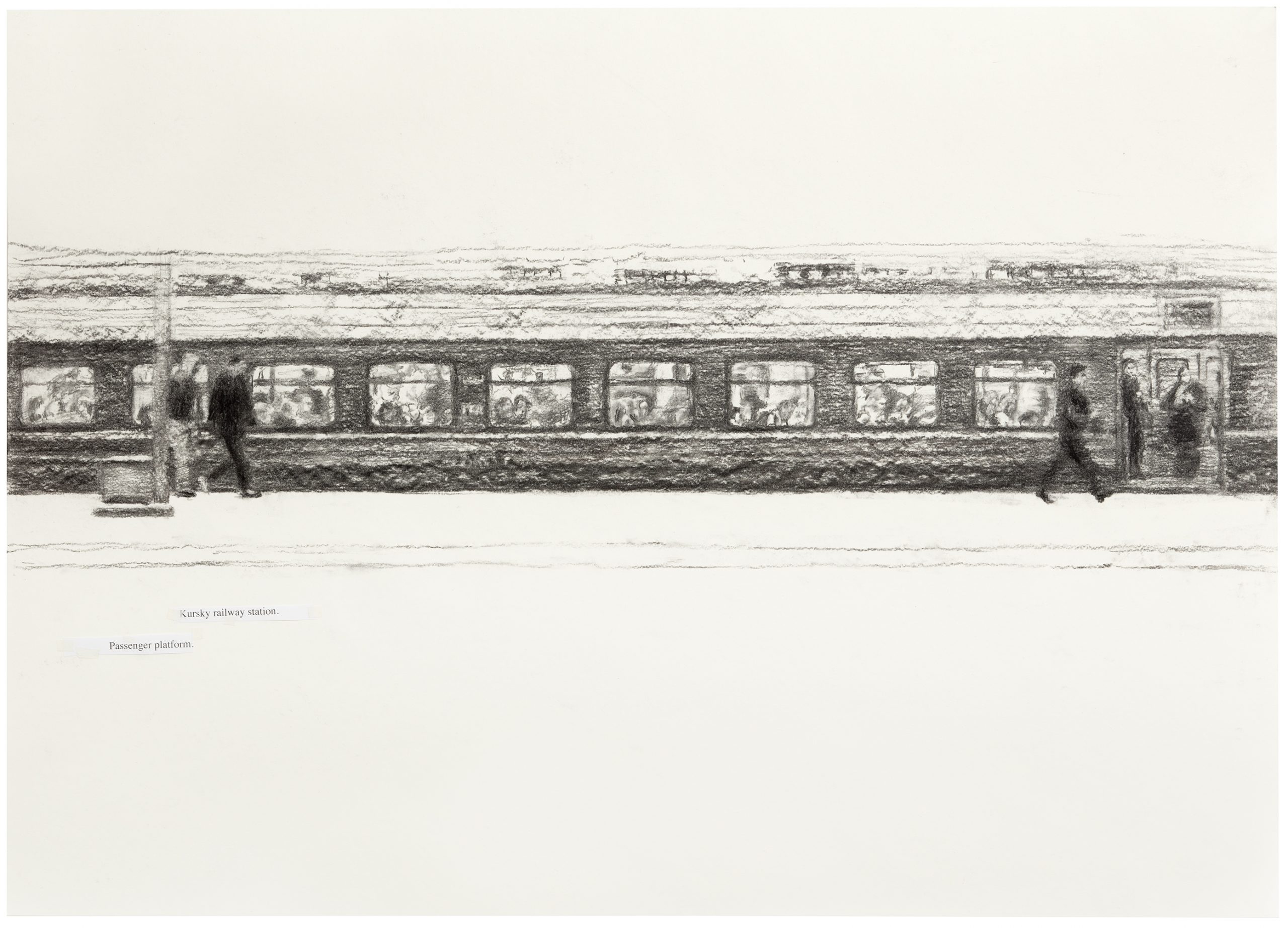 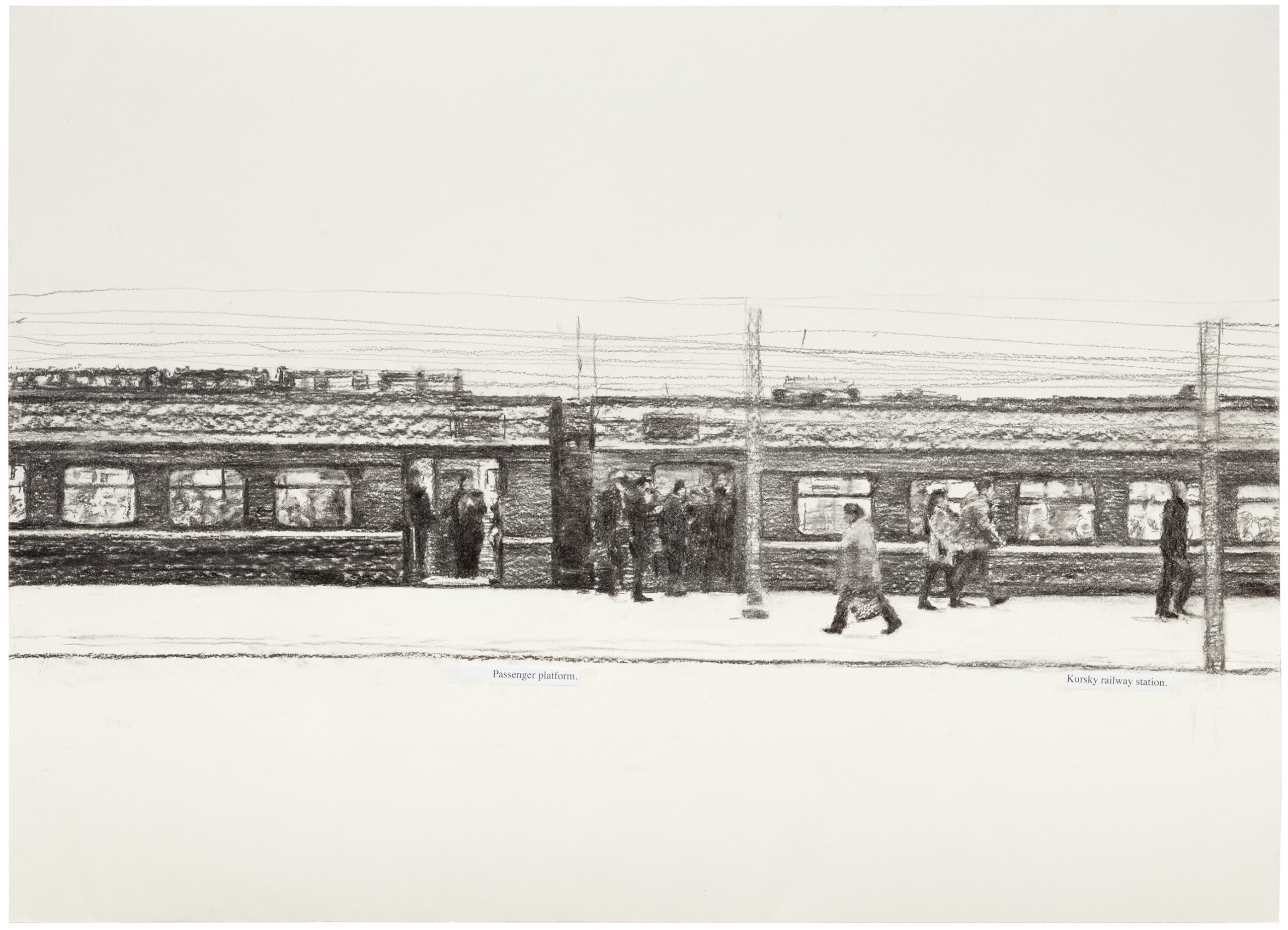