Pamela Brandt: I begynnelsen/Alussa/In the Beginning

The duo presentation has been a signature mode of operation for Kunsthalle Kohta since the inauguration four years ago. We experiment with varying degrees of sharing – time, time-and-space, time-and-space-and-concept – but usually the two artists mount simultaneous, separately titled exhibitions with a tangential conceptual connection between them.

Our next exhibition features new work by Pamela Brandt (Finland, 1950) and Rodrigo Hernández (Mexico/Portugal, 1983). At a cursory glance, they may seem an odd couple. Brandt is an idiosyncratic painter whose work has rarely been seen outside Helsinki, while Hernández probes the ever-shifting intersections of sculpture and painting and is steadily building an international reputation.

The two artists also turn to different intellectual and visual traditions for inspiration. In conversation about her paintings and drawings, Brandt repeatedly refers to cosmology, possible metaphorical interpretations of games and Jewish mysticism, while Hernández’s radiant polychromous pieces embody aesthetic sensibilities rooted in pre-colonial America and the twentieth-century global avant-garde.

Brandt challenges modernist ideas about what painting can and cannot do by reviving the nineteenth-century practice of the ‘thought-poem’. She strings together painted and drawn images into more or less linear narratives that reverberate with representational prohibitions. (Human faces, for instance, never occur in her work.)

Hernández picks through the leftovers of modernism, which he regards as an intelligent but doomed proposition, especially when it claimed, as in Mexico, to be a ‘perfect progressive synthesis’ of the international and the indigenous. His work may be read through the as yet scantily defined notion of ‘demodernisation’ (a redevelopment of ‘decolonisation’). How can we ‘de-develop’ the modern for the bright futures we may still want to achieve?

Yet when brought together, Brandt’s and Hernandez’s practices somehow touch each other. Although neither fully avoids referencing other people’s work, both are concerned with what might be called ‘fundamental artistic operations’. They articulate the previously unarticulated and create new images, new faces of the visual. And because they often find themselves in uncharted waters they also enlist words, spoken and written, for guidance.

This may sound rather abstract, but the exhibition will, we hope, demonstrate how these two modes of invention work in visual practice.

Under the overall title In the Beginning, Pamela Brandt will show 17 paintings in tempera an oil on canvas, mounted on aluminium (her usual technique) and 26 drawings in various techniques (pencil, colour pencil) on paper (all 2021). All of these also have individual titles. She will also execute the wall painting Cogwheels (2021), conceived specially for this exhibition. 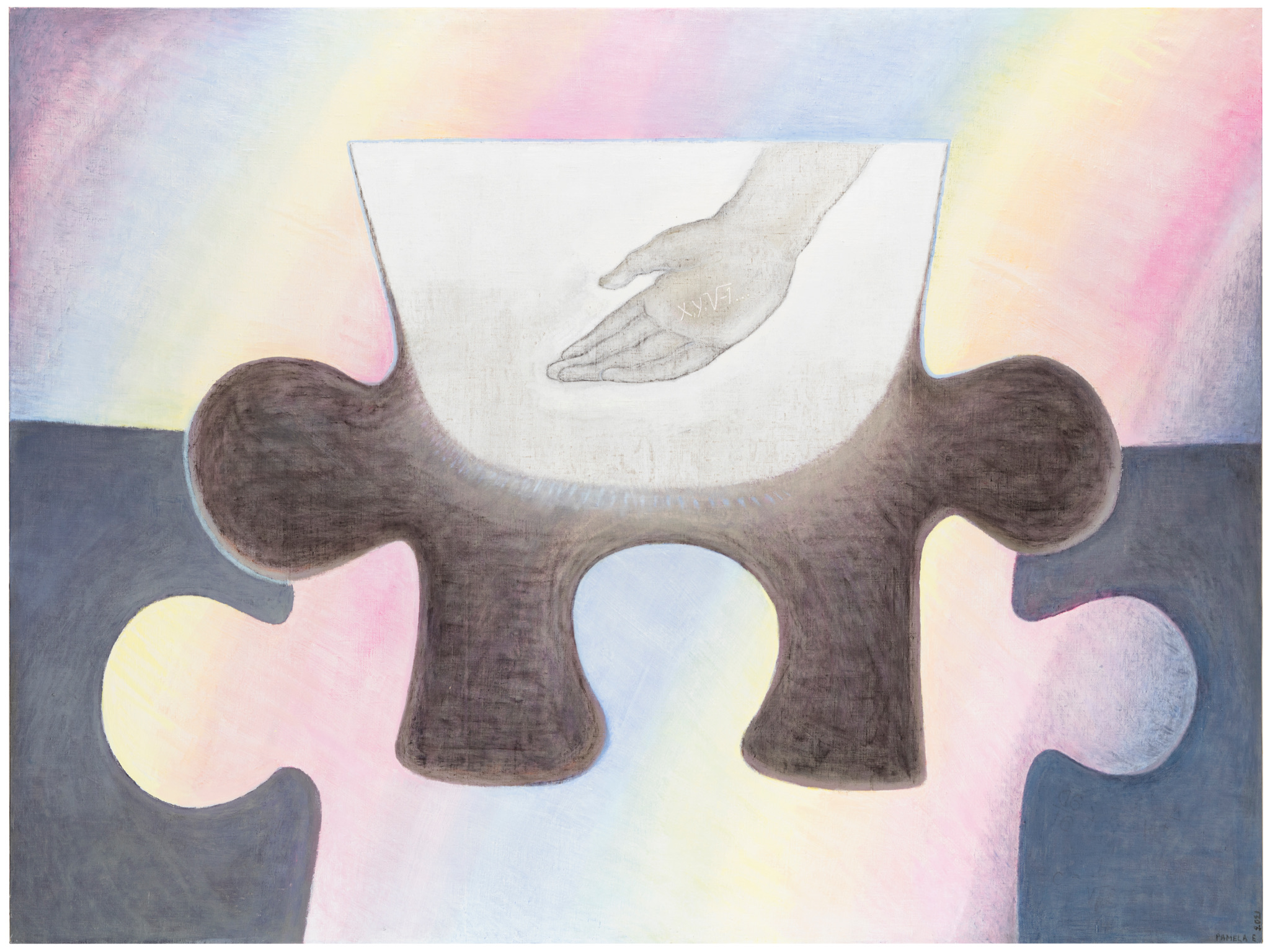 Pamela Brandt, Varats språk/Olemisen kieli/Language of Being, 2021. Tempera and oil on canvas mounted on aluminium, 140 × 187 cm

Here are some of her thoughts on the painting titled Language of Being, as recently told to the exhibition’s curator:

Pamela Brandt: It’s important that this is an edge piece of the puzzle. And this edge piece repeats a medieval iconographic thing, namely the hand coming out of the sky, to represent God. I’m sure you’ve seen it many times.

Anders Kreuger: Yes. But what might that formula be?

Anders Kreuger: But is it a particular formula, or what?

Pamela Brandt: No, it can stand in for anything. The root of minus one is a very exciting and important irrational number. Not much can be constructed without this ‘unit imaginary number’ (i).

Pamela Brandt: Behind the edge piece is the old association to the rainbow, which is hope, what Noah sees. And then we have the white part of the puzzle piece, behind the hand, which is another kind of light. Prismatic light, which we can see, and the other kind of light, which we can no longer see, but which has existed and which, according to old Jewish creation myths, was kept hidden in jugs. The original light.

Anders Kreuger: But then my idea of the white part of the puzzle piece as a baptismal fount wasn’t entirely wrong?

Pamela Brandt: No, that’s one of the interpretations. Anyway it’s light, and the little blue shine is simply the beams from that light.

Anders Kreuger: Which is in the jug?

Pamela Brandt: Which is in the jug, or in the jug of the puzzle piece, which at the same time is an edge piece. That is, the edge piece that builds the puzzle, so that it becomes a world.

As a complement to Brandt’s works, Georg Grotenfelt’s new film Pamela Brandt in Her Studio (2021, 16′) will be continuously screened in the exhibition. Produced by Nostalgia Film/Georg Grotenfelt. Music by Robin Brandt.

Rodrigo Hernández will show two new pieces (the term, with its modernist associations, is purposely chosen) that are both sculptures and paintings. The materials are cardboard, papier-mâché and oil paint and the titles are Petit-Musc 2 (a decoratively curled shape that snakes through the gallery space, suspended from the ceiling) and Petit-Musc 3 (two interconnected rectangles inscribing a sign-like human profile). 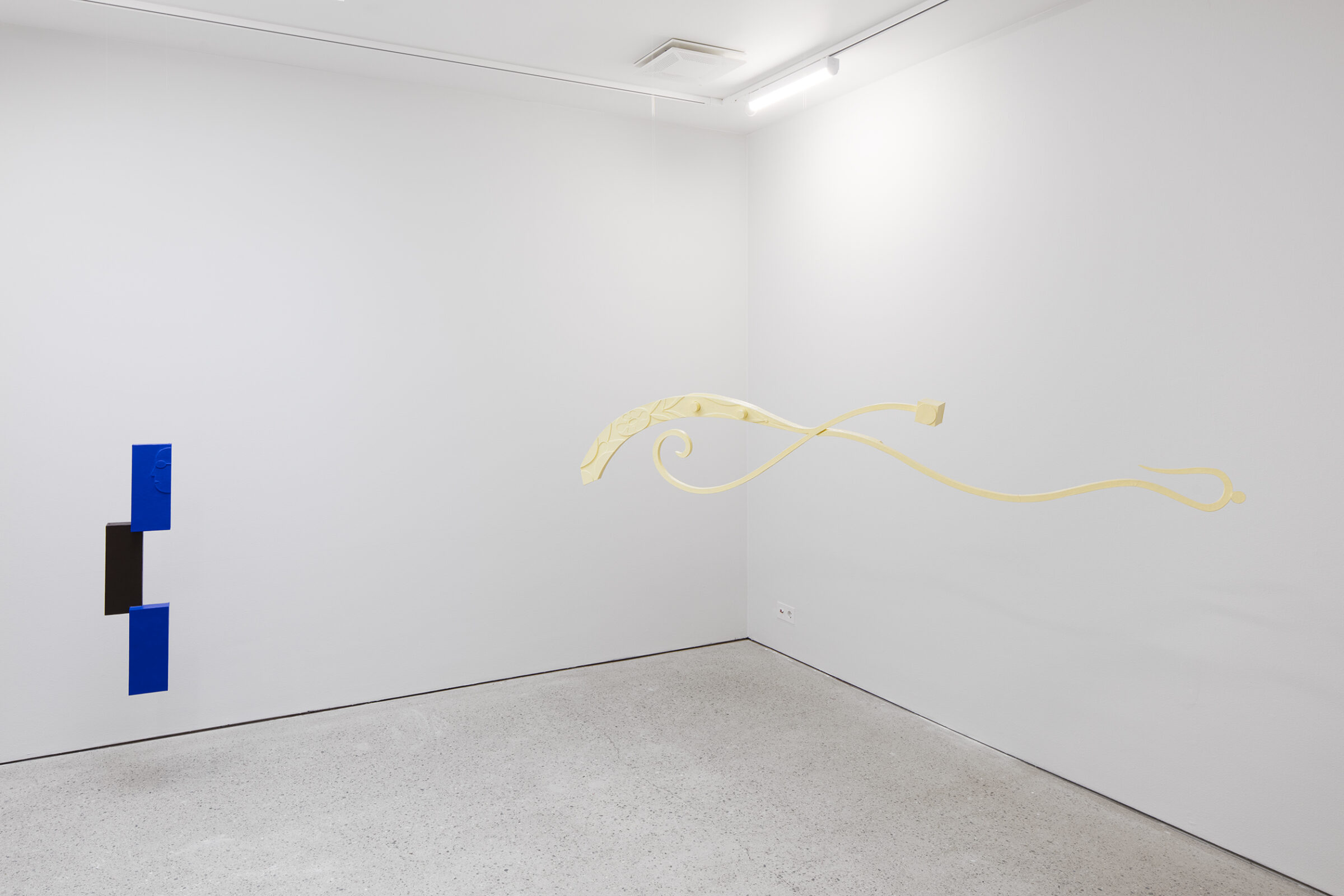 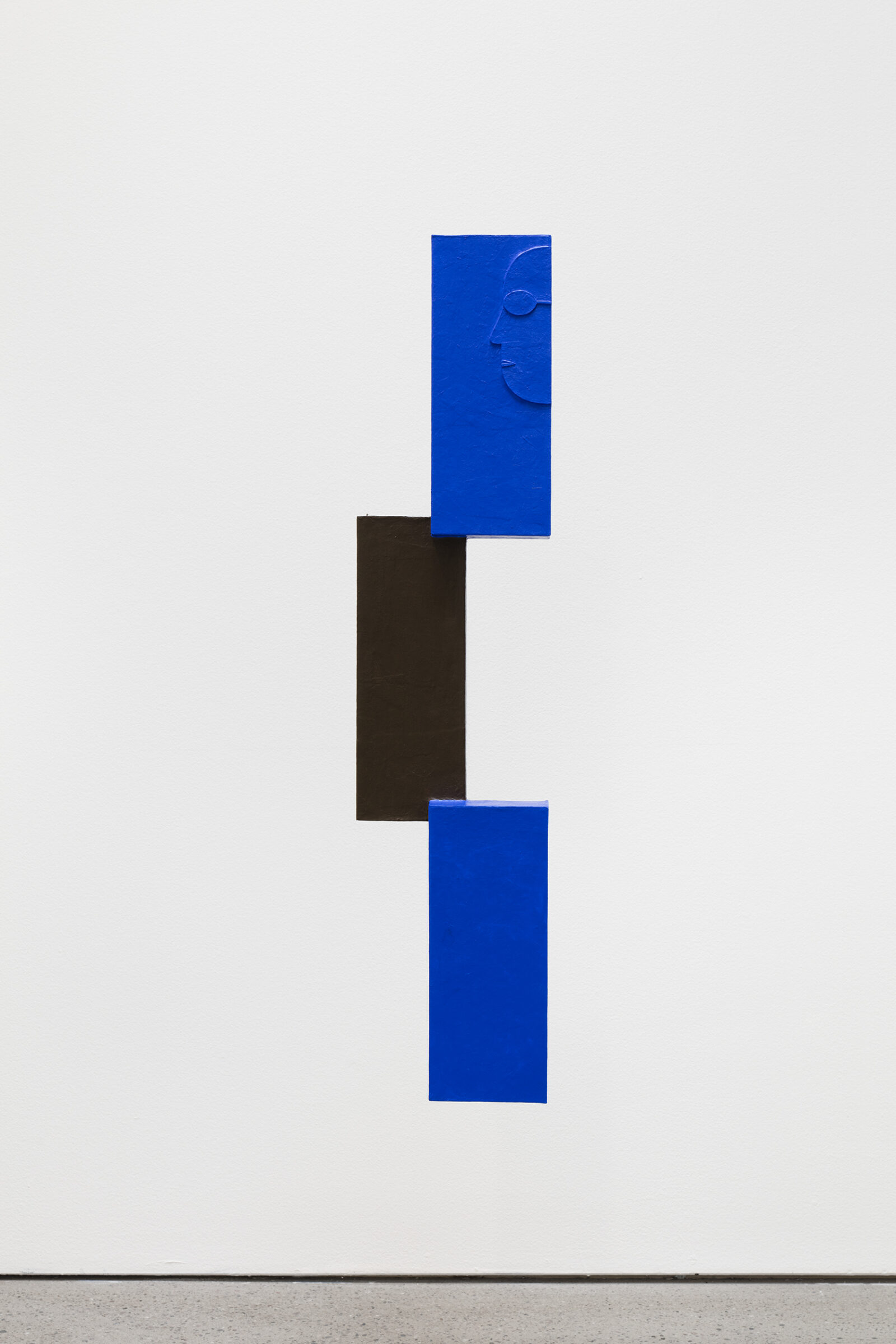 These derive from an earlier work by Hernández, a black paper and cardboard piece somewhat reminiscent of a bat’s wing and channelling an almost-animal sense of ‘puzzledness’, of being lost in a city, or to a city. The titles are an obscure reference to a scent originally harvested from the male musk deer, and also to the Rue du Petit-Musc in the medieval city centre of Paris (although its name may just be a corruption of petit muce, ‘little retreat’). Here is an extract from a short text by Hernández, articulating meanings that are embodied but adrift, tangible but floating:

I enter looking for signals of this being the same place. And yes, the signals are there but somehow they signal nothing. Can this be the same place and be gone at he same time? I want to ask someone something, but what to ask? Whom? Who can be friendly to this (shamefully) vague puzzledness? Do I want to stretch so far and reach for words now? See eye to eye with another human? I go out again and stare at my hands first, for no clear reason, then at my lonely self reflected in a big window. (I set myself in motion again, towards you?) A little insect must feel like this when it walks into a leaf, and that leaf is lifted by a human and placed inside a fountain.

The articulation of the exhibition space is especially important to Hernández, because the boundaries between his individual pieces and their overall presentation are, they too, both tangible and floating. At Kohta one of the walls of his display will be covered in cellophane, as a foil for a solitary drawing, Single Figure, from the series A Sense of Possibility (2014). The only full-figure image of a human in this exhibition, it appears to ‘connect the dots’ of the various visual narratives.

Pamela Brandt: I begynnelsen/Alussa/In the Beginning